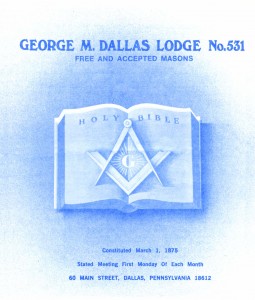 Our Lodge introduced the new Stated Meeting Bulletin this month! This new version was a combined effort between Worshipful Master John Sinclair; Acting Secretary Barry Wagner, PM; and Brother Jim Byers; but was originally initiated by the late Robert Lewis, PM. It’s a tri-fold bulletin unlike the former version which was a 2 two-page notice. The front cover has a new design and lists the Lodge’s website. The PA Grand Lodge had to approve of the new bulletin before it could be mailed to members.

The old version had been printed for decades by Brother Lewis who passed in December 2011. He owned and operated Wilkes-Barre Printing for almost 60 years. Brother Lewis and the Lodge’s secretaries worked together each month to produce the bulletins. Now, the Secretary will be in charge of producing the bulletin which is printed by Nick of Time Printing in Dallas which is owned by a Brother of 531.

531 will also be revising its Bylaws in the near future which will be mailed to members and also available at the Lodge. It will most likely be printed as a tri-fold too, rather than the small pocket-sized version that Brother Lewis had also printed. The PA Grand Lodge will also have to approve of the Bylaws before it can be mailed to members. This is another undertaking be led by Sinclair, Wagner, and Byers.