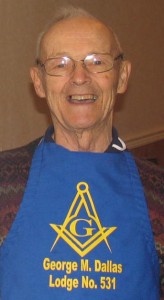 Robert Kramer Lewis, 77, of Andover Street, Wilkes-Barre, PA, passed away Thursday, December 15, 2011. Brother Lewis became a Master Mason in 1960 at Lodge 531 and later served as its Worshipful Master in 1966 and 2010. He was the quintessential Mason serving in many capacities throughout his 51 years as a Member of Lodge 531. He was also a former member of Caldwell Consistory and Irem Shriners. He owned and operated Wilkes-Barre Printing for 60 years and printed most of the materials used by our Lodge and others throughout the area. If he wasn’t in the Lodge he was in his shop, if he wasn’t in his shop he was fishing.

Masonic Funeral Services were conducted by George M. Dallas Lodge No. 531 along with several Brothers and Officers from other District 9 lodges. Internment  was held in Oaklawn Cemetery, Hanover Township.

Please join us in prayer and remembrance of Brother Lewis.