Highlights from our November Meeting 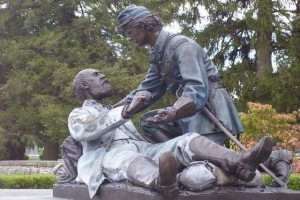 Worshipful Master John Sinclair honored the Lodge’s Past Masters as part of Past Masters’ Night during the Stated Meeting held on Monday, November 5, presenting them with a Masonic tie clip as a token of appreciation. The Lodge also agreed to make a $150 donation to the Blue Chip Farms Animal Refuge, Dallas.

Afterward, there was a presentation on Masons and the American Civil War by Bro. Martin Braen. Brother Braen is the Secretary for the Susquehanna DeMolay in Wilkes-Barre and a member of Lodge No. 442 Wilkes-Barre. Braen spoke about the lives of soldiers who fought in the War as well as Freemasonry in the North and the South.

Braen also told the story of “A Friend of a Friend” which is memorialized by a statue in the National Cemetery in Gettysburg, PA. Union General Winfield Scott Hancock and Confederate General Lewis Addison Armistead were friends and Freemasons. They had served and fought side by side in the U.S. Army prior to the Civil War, but Armistead refused to raise his sword against his fellow Southerners so he joined the Confederate Army in 1861. Hancock and Armistead fought for 27 months never meeting until the Battle of Gettysburg in July of 1863.

During Pickett’s Charge on July 3, Armistead led his men who penetrated Hancock’s line. Ironically, when Armistead was mortally wounded, Hancock was also wounded. Depicted in the sculpture is Union Captain Henry Bingham, a Freemason and staff assistant to Hancock – who was himself wounded – rendering aid to the fallen Confederate General. Armistead is shown handing his watch and personal effects to be taken to his friend, Union General Hancock. Armistead died days later on July 5.

The monument was presented by the Right Worshipful of the Grand Lodge of Free & Accepted Masons of Pennsylvania and dedicated as a memorial to the Freemasons of the Union and the Confederacy in 1993.