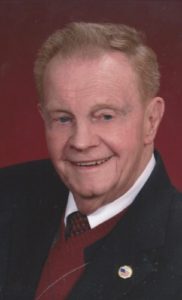 Born in Dallas, he was the son of the late Bert and Gladys Dymond Brace and was a graduate of Westmoreland High School.

Red retired as sales manager with Die-A-Matic Inc. and also worked manufacturing and other sales jobs.

Red had served his country honorably with the U.S. Navy during the Korean War.

He was the consummate gentleman, a devoted family man, a special friend to all who knew him, and always approached life with wit and a smile.

The family wishes to extend their heartfelt appreciation for the constant phone calls, visits, cards and prayers from all of his friends and extended family.

The funeral will be held at 11 a.m. Friday in Shavertown United Methodist Church.

Interment will be in Fern Knoll Burial Park, Dallas, with military honors.