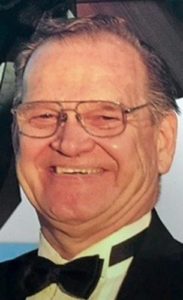 Born in Dupont on Dec. 31, 1936, he was the son of the late Leo and Helen Kaspriskie Urbanski. Edwin was a member of Holy Mother of Sorrows Parish Church, Dupont. He attended Houston City Elementary School, Avoca, and attended Pittston Twp. High School. After high school, Edwin joined the Navy and served during the Korean War. Upon returning from the Navy, he attended the National School of Meat Cutting, Toledo, Ohio. Edwin was also a student of the Dale Carnegie Course and finished the program at the top of his class. Edwin was employed locally as a meat cutter for over 25 years by A&P Supermarket and he retired from Stop and Shop Markets, New Jersey.

He was a member of the St. John’s Masonic Lodge, Pittston, and currently a member of the George M. Dallas Masonic Lodge 531, Dallas, Pa., for 55 years, also a member of the Irem Temple, Dallas. Edwin enjoyed gardening. He also loved to dance in polka style and square dancing. Edwin was a loving father, grandfather, brother and friend, and he will be deeply missed by all who knew and loved him.

In addition to his parents, he was preceded in death by an infant child; and his brother, Stanley Urbanski.

Edwin is survived by his children, Kimberly and her husband, Daniel Ruda, of Avoca; Susan Urbanski, of Avoca; and Timothy Urbanski and his wife, Kimberly, of Melbourne, Fla.; grandchildren, Sara Urbanski, Michael and Amy Ruda and Jolene Ianniccari. Also surviving are his siblings, Regina Bahaley, of Duryea; Juanita Baransky, of Nazareth; Carol Bondurich, of Pittston Twp.; and Albert Urbanski, of Pittston Twp.; his ex-spouse, Antoinette Davis, of Duryea; and many nieces and nephews.

Edwin’s family would like to thank the nurses and staff of Mountain View Care Center for their kindness and care that they gave to Edwin while he was a resident.

Funeral services will be held Monday, March 27, at 8:30 a.m. from Kiesinger Funeral Services Inc., 255 McAlpine St., Duryea, with a Mass of Christian Burial at 9 at Holy Mother of Sorrows Church, Wyoming Avenue, Dupont, with Father Walter Placek officiating. Friends may call Sunday, March 26, from 5 to 8 p.m. Interment will be held at the parish cemetery.

In lieu of flowers, memorial contributions may be made to the Shriners Hospitals for Children